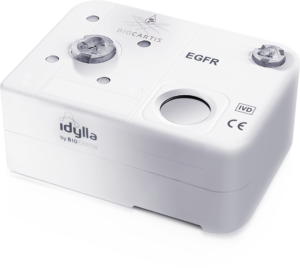 Biocartis announces the publication of a large new study2 comparing the difference in turnaround time between in-house automated rapid PCR3-based EGFR analysis and Next-Generation Sequencing (NGS) by an external laboratory, with a focus on patient health outcome. The study concluded that a dual PCR and NGS testing strategy for stage IV non-squamous, non-small cell lung cancer (NSCLC) patients has the potential to improve care and survival outcomes by providing access to the right test at the right time.

Lung cancer accounts for the largest number of cancer deaths worldwide, as such there is an opportunity to significantly impact patient outcomes through earlier intervention4. EGFR or ‘Epidermal Growth Factor Receptor’ mutations are the second most common cancer driver mutation in NSCLC. EGFR testing is important for the detection of EGFR mutations which help to determine whether someone with NSCLC may benefit from targeted therapy-based regimens in case of presence of EGFR mutations, or potentially from immunotherapy-based regimens in case of absence of EGFR mutations5. EGFR mutations are commonly assessed by using NGS. This is a complex and time-consuming technology, which may delay informed patient management decisions for patients with NSCLC.

In the study, 102 test results for lung adenocarcinoma patients were compared using both NGS and Idylla™ EGFR Mutation Test (CE-IVD)6. Unfortunately, 6% of the patients died before the NGS report was available. Of the 17 patients whose condition deteriorated rapidly, 3 (18%) were identified as having an actionable variant in EGFR that could have been treated with tyrosine kinase inhibitors. Of 102 tests performed, agreement between the two test modalities was achieved in 96.4% of test events where there was sufficient tissue for testing. Average turnaround time to report EGFR mutations with the Idylla™ EGFR Mutation Test was 3.8 days, versus an average turnaround time of 17 days for reporting of NGS results by an external laboratory.

Furthermore, the study highlights additional benefits of using Idylla™, including minimum staffing time requirements, elimination of the need for batching cases as well as the ability to report biomarker results on the day of the request. Finally, there were 11 occasions where NGS failed to extract sufficient DNA from a test sample and Idylla™ was able to produce a valid report in nine (9/11, 82%) of those instances. Two of the nine tests that failed NGS included patients where an L858R mutation was detected by Idylla™ that went undetected by NGS.

Herman Verrelst, Chief Executive Officer of Biocartis, commented: “The routine reflex of many lung cancer multidisciplinary teams or pathologists is to request NGS testing, which takes place at an external, specialized lab. As such, results take a lot longer than rapid in-house EGFR testing using Idylla™. In the study, 18% of stage IV NSCLC patients were at risk of rapid clinical deterioration. This study clearly demonstrates the positive impact the Idylla™ EGFR Mutation Test can potentially have in improving cancer survival rates.”