Standardization in specimen description at the grossing station

Pathology is an “image-based” discipline, where interpretation uses both visual and non-visual data. As time becomes more and more valuable, a systematic approach to descriptions at the grossing station is essential in maximizing user efficiency.

“If the dimension of the specimen are not recorded, the key section not taken, and the proper special studies not performed at the time of the initial gross examination, the chances of acquiring this information may be lost forever…” ROSAI AND ACKERMAN’S  Surgical Pathology Volume 1 Chapter 2

In the past decade, more and more pathology laboratories have incorporated digital images to text based description of specimens, and hand drawn diagrams. 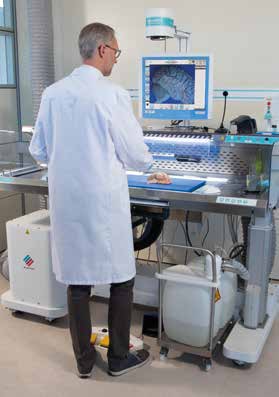 However, the use of hand held cameras still includes numerous manual steps, such as saving the images on a computer and having to rename all the photos according to the lab’s case numeration system. Often, it is necessary to print the photo to manually draw on it before scanning it for record purposes. All these steps are labour intensive, may lead to a mislabelling a photo and are not friendly to including images in a report through an LIS system.

By using a camera and software fully dedicated to digital imaging for the grossing station, the MacroPATH system allows the entire grossing procedure to be documented electronically. Audio comments, annotations to the images, as well as recorded videos enable a complete record of the grossing procedure, autopsy, necropsy or forensic cases.

The MacroPATH can assist a pathology laboratory in dramatically reducing specimen turn-around time at the grossing station while adding valuable data to the case’s report.

This is part two in the blog post series: Milestone’s chain of custody

Previous posts:
Safe specimen transfer from the theatre to the lab >